He is there
Protector of the fort
Through the seasons
He stands
Scarred and ready
Moving in the wind
Sometimes
Escaping
The tether that keeps
Him stationary
In place
He is wise
And knowing
Of all who trespass
As the ice drips
From the cover of his place
He stays
Lingering in the shadows
My talisman
My guard.
Faded
He grows old
Yet never loses pace
Through the seasons
He remains
Stead fast
On guard
Keeper of the gate.

Longing
To be in
The embrace
Of a sunbeam
On waves
In a hidden place.
To sway
Move with the rolling
Back and forth
A sweet peace
Salt on my lips
I lick it away
The taste of
The drops
Still remain
A memory
Of bliss.
The world sounds
So different
Under water
Maybe recollection
Of womb state
We understand
This nature
We have come
To this place
So long ago,
The truth that connects
Us all.

I was a huge fan of Disney movies as a child. I was raised on
Old Yeller where I cried like a baby and still do, Bambi, where I became a fan on animal rights, which considering my father was a hunter, was not so great, but then became a fan of death to Bambi after hitting three of those cute little deer and causing a lot of damage to my cars. I was afraid of being poisoned by evil witches and harassed by step sisters, even though I did not have any. But I was an ugly duckling and was very aware of the fact all through life. Would my prince come some day? Yes he would. I had to kiss a lot of frogs (was that Disney?) but I had faith that life works the way it is supposed to, even for ugly ducklings like me so I stayed the course. After all, if you never open yourself to love, you cannot be open to receive it. 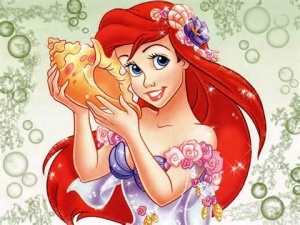 I was Ariel, and If I had to give up my mer-people to walk on land to find my man, by golly that is what I would do. I bought a motorcycle. Now I know you are thinking nothing screams sexy like a bike…I can hear you from here……I did not do this to find a mate, I did this because I enjoyed riding and knew damn well if I rode with the then current man, I would not live to see marriage, so I bought my own. Being youngish and with not a lot of money to spend,it wasn’t a pretty bike, but it ran. My dream guy in my mind,was awesome sexy like Prince in Purple Rain. I love purple and I wanted a big beast of a bike and a hot singing biker dude. Well, I got one, the bike, except I could not put both feet on the ground at the same time which if you know anything about balancing a bike, this is not a good thing when you are stopped on any terrain. It was not purple either. After dropping it a few times, I traded it in for an even bigger one, good price, but bigger than the first one, and still not purple. If I couldn’t lift the first one, I certainly could not lift this one. A few years and tip over’s later I traded the other guy and the not purple motorcycle in for the tall dark eyes meet across the smoky crowded room oh my god I love him and he is a real biker kind of guy and an oh my god it is purple and I can put both feet on the ground motorcycle. 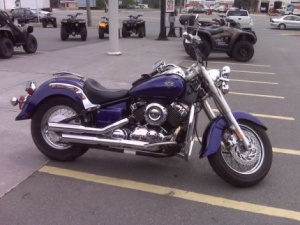 I had never been on a long ride before but he took me for trip to Cleveland. To wrap my arms around him and snuggle up to his back, oh my god, this is bliss. Years later, We finally got married. He of two bikes and me of one. I bought it in 2003. It has maybe 2800 miles on it. Sad?(the mileage aspect) yes, I know, but the thing is, as I got older, I realized the fun of a ride was sitting with the one you love, holding him tight and being able to laugh and talk together at the same time, instead of yelling above my drag pipes to be heard, well that is what it is all about. Being together. Yes my prince came, and as he stands in the kitchen cooking us up some fine BBQ pork macaroni and cheese (did I mention he is grill master extraordinaire ) and as I sit here being a slug drinking my coffee in my energizer pink robe I realize how blessed I am. I am my dream princess living the dream, and he can’t sing like Prince, but he can ride circles around him on a bike and in the kitchen and did I mention the grilling? OMG….no Bambi though. 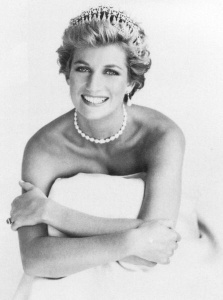