Moon hangs bright above,
swollen orb watching like a giant eye,
shadows guiding the branches like skeletal fingers
grasping as we find our way
in the darkness we hear her purr.
She moves in between the dark and light
memories of childhood
gleeful fright,
soft and seductive her voice calls forth
sharp nails catch on silky drapes
shredding the strings
she happily plays.
The moods shifting in and out
bringing a smile, perhaps a pout
and costumes betray no curve or ounce
we crawled on all fours being
as stealthy as she,
as the masked crusaders tried
to capture their prey
she toyed so artfully
yet often foiled,
till next time kids
we’d sigh and dream
of heroes and villains
and knowing that it wasn’t real,
took pleasure in playing all of the parts,
when innocence was the easiest art
and we could be everyone
wearing our masks,
till night came to call
Happy Halloween to all
and live and laugh
be all of that and more,
but I will wear my tail
and whiskers too perhaps
after of course,
my cat nap.

Image of my favorite cat lady of all time….meow….purr…..

Waiting in the wings
flickers of moonlight fill the mood
overflowing buckets of stars falling
shining on like diamonds
we wonder why
grounded on sand
how can we be
as bright as thee.
Twinkling silver dots the sky
whispers of the wind slip by
calling us to higher things
knowing the gifts this life always brings,
we stand together in darker days
time moving in its wondrous way
we cling to the wishes
granted by stars
aware of who and why we are
drifting through space
the human race
to share the love
is all it takes.

A poem for all of my blogger friends, Sheldon who asked for more art particularly, a rhyming bit for the G man, hope and love to gift to E and more,
so many to name but if you’re reading, know you are included. We all shine on….always.
Artwork created with watercolors, swarovski crystals (the stars) and OPI nailpolish (My voice is a little Norse) color an hour ago ❤ and unfortunately, my camera did not do the colors justice, moon is a shade of crimson mixed with a whole bunch of others I don't remember 🙂 that's how I roll 🙂 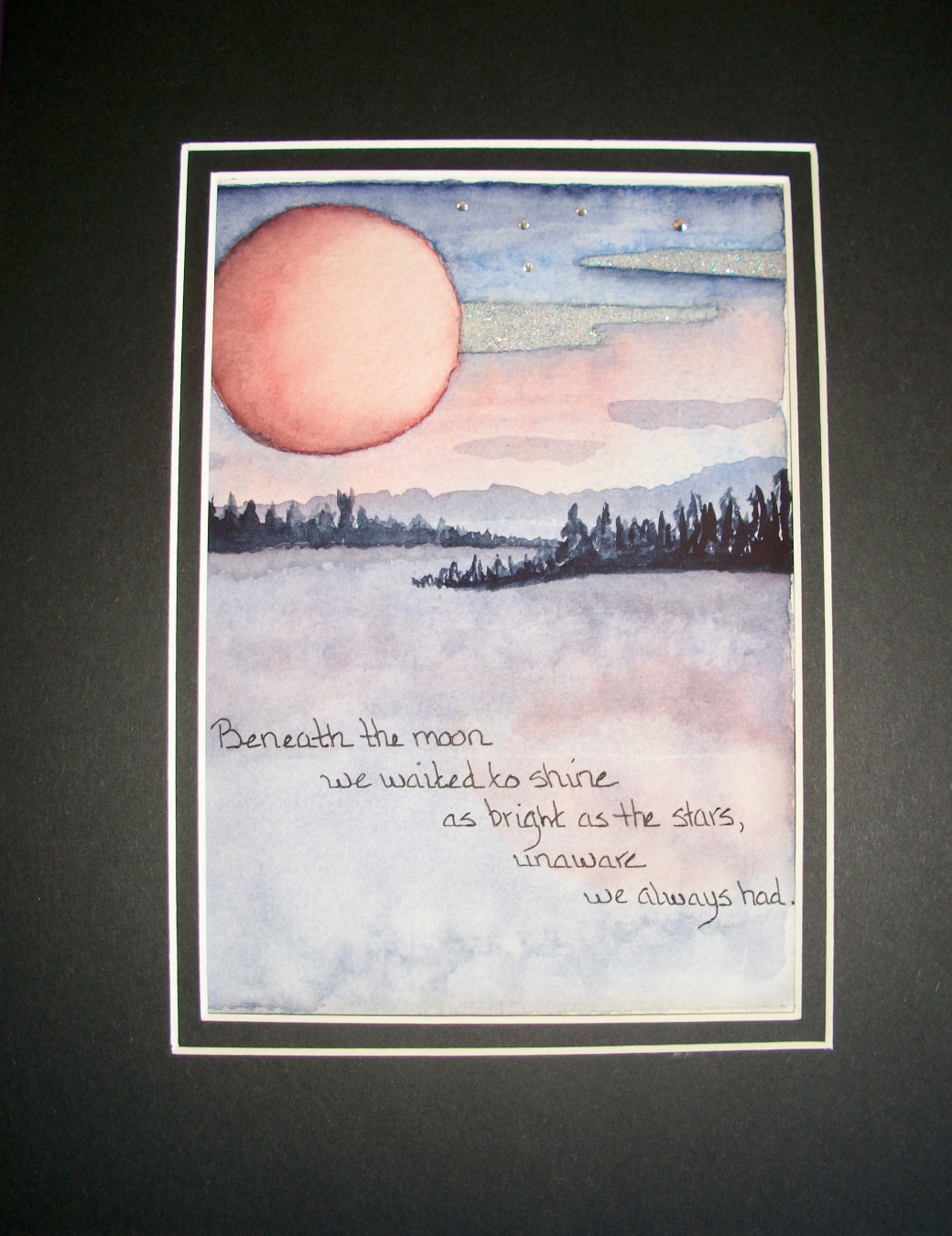 “Meet me at the pond tonight at 7”. Jessica saw the email as soon as she opened her laptop. A thrill of excitement ran through her when she saw Jeremy’s address and glanced at the clock on the kitchen wall. It was 4:44 and she sighed, not much time to prepare. Her Siamese cat Calypso nuzzled her face as she proceeded to drape her body across the keyboard for some attention. Jessica lifted the purring beast, stroked its rabbit soft fur a few times and then deposited her onto the chair beside her. No time for loving my friend, I’ve got to get ready. She closed the laptop and jumped up from the chair.
Her closet was a myriad of silk and linen, she moved through them one by one before deciding on the sheer white half slip dress. Yes, this will do nicely she thought and hung it up on the bathroom hook on the door. She jumped into the shower and took extra care with her preparations. Coconut scent filled the air as the suds ran down the drain, her long hair sleek and falling to her hips, she rinsed off and wrapped up in her thick towel. Once her hair was perfectly quaffed into waving tendrils and her makeup minimally applied to her liking, she slipped into her favorite dress, the same one she had been wearing the last time they had met at the pond. A night that still woke her in an ecstatic mood a few times a week.
She thought it had been over, not hearing from him for two months as she had sent repeated emails to him. Summer turned into fall and she just assumed he wasn’t interested anymore. Jessica threw on a light overcoat and grabbing her purse, a blanket and her keys, jumped into her car to buy some champagne, berries, a loaf of crusty Italian bread and a nice round of brie. Jeremy was going to get the surprise of his life tonight she thought.
Jessica pulled into the gravel besides Jeremy’s car next to the fence and grabbed the bag of food. The champagne was chilling on ice in a silver bucket wedged between the seat and she pulled everything out, carrying it all through the opening and set it down beneath a tree beside the pond. The night was getting cooler and a fine mist was rising from the pond, she dipped her toe in and realized it was warmer than the air. Smiling, she pulled out the blanket and sat down. She looked around and realized Jeremy was nowhere to be found. Calling his name repeatedly and getting no response, she pulled out her phone and realized she was a half hour early. He must have gone hiking on the trail while he was waiting for her. Jessica was never on time and he knew this so she thought she’d change it up a bit and arrive early to prepare just in case he didn’t show till 7. She got up and walked back to his car. The black car was covered in dust. Jeremy was a stickler for promptness and his car was always immaculate. She tried the door and realized it was unlocked. A Starbucks cup was in the holder half filled with his favorite black coffee and she realized it was ice-cold.
Jessica, are you here yet? A voice interrupted her thoughts and she smiled. Perhaps he was changing after all, letting loose a bit and having fun for a change. He was gorgeous but so uptight she thought and shutting the door she headed back to the pond. The light had faded and she saw ripples moving across the water. A dark head was moving quickly, back and forth and she slipped off her overcoat to reveal the short white sheer gown she wore. She walked into the water slowly, watching him moving about and yelled out, a might cold for a swim don’t you think my love? But she kept moving deeper in, feeling the grasses move across her legs, caressing her with their soft yet slimy feeling tendrils. His head dipped below the water and she laughed seductively. Trying to freak me out my love? as her body kept moving deeper and deeper into the depths. She felt his hands touch her then, moving slowly up her legs, past her bottom and reaching to stroke her stomach. She dipped her head back as his hand found her breasts and she sighed softly into the night air. Dipping down till her chin hit the rippling water, she waited impatiently to gaze into his beautiful blue eyes once more.
His hands gripped her around her neck and he pulled her under. She fought as the weight of his body submerged her, swallowing water as her air supply diminished until there was nothing left. No one ever came to the surface.

Post note: Jeremy had died two months ago, drowning in the pond where he met Jessica after she had left that night.